Happy New Year all and welcome to 2015, when I catch up on things I was going to blog about last year! Ok, as promised, and lost in the time vortex of my life, here is how I got these costumes together using a lot of cheating and a bit of ‘making’ . 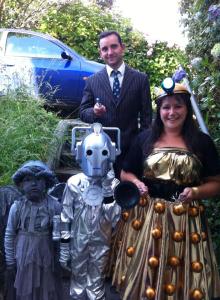 The first thing you need is a little girl who wants to scare people. Believe me, ours was really scary! The cheat part was to not try and make a replica dress, but to search Ebay for a grey dress and buy it for a couple of pounds. There were loads of dresses available. This one caught my attention because of the wafty layers. 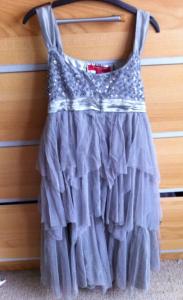 Even though the real Weeping Angels have stiff, much plainer dresses, I liked this wafty look. To hide the sequins at the top I got an old grey T-shirt (donated by a friend – one her son grew out of). I turned it inside out and then cut the arms off. Then I cut the bottom half of the T-shirt into strips, stopping in the middle-ish. I then folded the strips up and stitched the ends to the neckline of the T-shirt, so they looked like the folds in the weeping angel dresses. 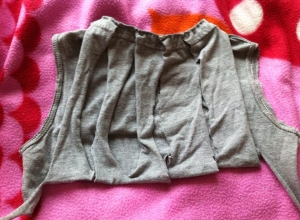 I was lucky that this T-shirt had had buttons down the (original) front of it, which was now the back, allowing access for the wings. I tied the two loose bits you see sticking out around the back under the wings.

As for those wings, I bought a pair of feathered wings – this is the laziness factor taking over from the creative! I know lots of people have crafted the wings from cardboard and grey sponge bits for feathers. On You Tube you will find a lot of advice on making these.  So, with my ready-made wings, I only had to get some grey stone-effect spray (available in craft shops, on ebay etc – I got mine from Hobbycraft). It took the whole can to spray the wings. It has to be done very carefully as the spray can clog the feathers badly. I just wanted them to stay looking like feathers, but stone feathers are less ‘fluffy’ so a little clogging was fine. 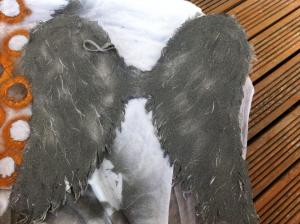 Again, for the hair, there is a lot of advice out there. I steered clear of a hard, helmet-like ‘wig’ due to comfort levels for my little girl, she’d never put up with that! Instead I made a wool wig, which was surprisingly easy. I followed a very clear You Tube video on making a wool wig.  http://youtu.be/P4ZypMCg_Lo

Basically you get your ball of wool, measure the length of a whole strand going from one side over to the other side of the head, then pass the wool between two chair backs, or your hands, until all of it is divided up into these lengths. Then you cut the ends to get rid of the loops. To hold it all together you just have a thick strip of grey felt (also from Hobbycraft). Measure from the front to the back of the head, excactly the length of the parting if you were doing bunches. Cut the felt to this length and it becomes the ‘under-structure’ / under-parting bit you sew the wool to. The video points you to using a sewing machine, but I didn’t have one so I did it by hand, using small stitches and lots of patience! Once I had a head of long grey hair I shaped it into a kind of weeping angel style by rolling the front round from the parting and securing with some stitches and pins. I added some left over felt as the hairband. I also made a scull-cap out of the gusset of a pair of tights and sewed the wig onto it so that I could keep it on her head. This was fiddly, but I think it was more secure this way.

Before putting it all on, we did her face paint. Again I used a You Tube tutorial. There are loads to choose from, but I really liked this one & found it easy to follow and get a good result http://youtu.be/yOX_iezbysU

Final touches not mentioned yet were: a long sleeved grey top to go under the whole thing and cover arms (rather than painting arms grey) and a pair of cheap grey gloves. The final little treat was to give her two Black Jack chews, which did a great job of making her mouth that lovely scary black colour! 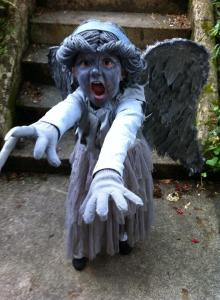 And an even more scary ‘re-touched version 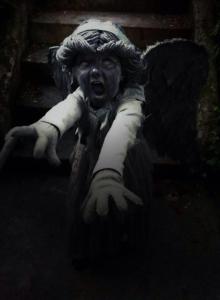 My little Weeping Angel got plenty of compliments for this, but she stayed in character for the whole parade and scared lots of people!

Now that the summer holidays are well and truly a blurred memory and we all feel like we are back to normal, I may just share a bit about the costumes I made for my family to dress up as Doctor Who characters last June! I know, that was ages ago, but anyway…. I trawled the internet, and You Tube to find tips etc to get these costumes together. I also spent a lot of time on Ebay looking for bargains. Here are the costumes we ended up in, and the ‘how I did it’ will follow……very soon….whooshhhhh whooshhhhh whooooshhhhh (That’s me disappearing in a virtual tardis)! 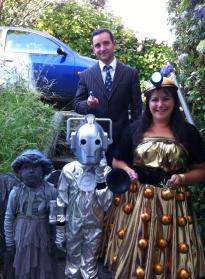 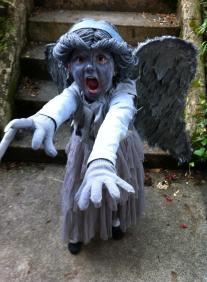